My friend and colleague Satyendra Srivastava passed away during the summer. I met Satyendra through my work as editor of After Shocks: The Poetry of Recovery for Life-Shattering Events, an anthology of 152 poems by 115 poets from 15 nations. Satyendra’s poetry graced those pages with elegance, irony, and his knack for quiet figurations. After corresponding for years, I finally met Satyendra in person during the inaugural International Reading Festival at the Morgridge Center at the University of Central Florida in April 2010. I had invited him to a panel I hosted there and to a reading with poets Marjory Wentworth and Susan Laughter Meyers.


Satyendra was born in India, literally a child of the Ghandi revolution for independence. He moved to London in 1958, received his Ph.D. at the University of London, and taught at the University of Toronto and at Cambridge. He published in both English and Hindi, and he traveled the world for his readings. That world has lost one of its shining poets. His surviving widow, Munni Srivastava, has published a remembrance in Ambit Magazine, where Satyendra was a contributing editor for many years. Read it at: Satyendra Srivastava’s Life and Poetry


Here’s the title poem from his collection published by Ambit Books, London. The poem appeared in After Shocks: The Poetry of Recovery for Life-Shattering Events.

Sir Winston Churchill he knew India
He knew
Because India was to him the Kohinor
Of that Empire on which the sun never sets
Sir Winston also knew the town
Which his people had built for their comfort and ease
Cutting and carving it from the Himalaya’s lap
– That child of the icy summits – that town
Which is called Mussoorie
Sir Winston knew where that town was and why
Because he had walked its long street rising and falling
Which had reminded him – somewhere somehow –
Of Princes Street in Edinburgh, another
Extremely beautiful town in the British Empire
And Sir Winston knew this too that
Also in the town called Mussoorie
A wave had risen
Shaking the foundations of Britain’s Empire
The kind of wave that would seem to him
Just the folly of that crazy naked fakir of
India’s national struggle
And Sir Winston knew this too that
In India some women who
Worshipped that same naked fakir as a father
Had laid down one day in the town of Mussoorie
In rows in the road and prevented the units
Of soldiers of the British Empire from going further
And among them had been some women who
Heavy with child could have given birth at any moment
Therefore exactly for this reason I
Went to Hyde Park Gate as soon as
I reached London
Stood in front of Sir Winston’s shut house
Bowed respectfully, then spoke out loudly
‘You, Sir Winston, knew my mother
Pregnant in her eighth month
Having received my father’s blessing
She too laid down in
That road in Mussoorie
From where the army units had to return –
I am the son born from that mother’s womb
And Satyendra is my name
And I have come to tell you
That I have now arrived in England.’

Copyright © 2006 by Satyendra Srivastava. Reprinted from Sir Winston Churchill Knew My Mother (Ambit Books 2006) by permission of the poet. Appeared in the anthology After Shocks: The Poetry of Recovery for Life-Shattering Events.

Satyendra Srivastava was born in Azamgarh, Uttar Pradesh, India. He studied at the University of Poona from 1953-57, and the University of London from 1962-77, receiving his Ph.D. in history in 1978. He lectured in Indian Studies at the University of Toronto from 1968-71 and at the University of Cambridge from 1980-2003. With many published collections of poetry in Hindi, as well as plays for the stage and radio, he has also been a columnist for various Indian Publications. He writes in both Hindi and English. He has traveled widely to read his poems: from the U.S., Japan, and Russia to South Africa, Israel, and Egypt, among many other nations. His collections of poetry published in English are Talking Sanskrit to Fallen Leaves (Peepal Tree Press 1995), Between Thoughts (Samvad 1998), Another Silence (Samvad 2003), and Sir Winston Churchill Knew My Mother (Ambit Books 2006) from which three poems were reprinted in the anthology After Shocks: The Poetry of Recovery for Life-Shattering Events. He has received several awards for his writing. He lives in London and Cambridge and frequently travels back to India. 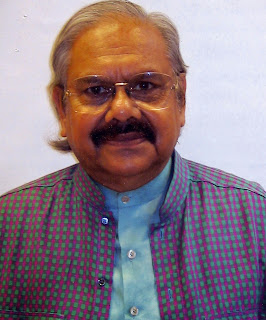 An Interview with Satyendra Srivastava from past blog posting


How did you come to write “Sir Winston Churchill Knew My Mother”?


This is a political poem. My mother was very politically conscious and a great follower of Mahatma Gandhi. Early on she became involved in demonstrations against the British Government in India during the country’s Independence struggle. The poem portrays a lady who, on one hand, was a very traditional Hindu wife and mother, but, on the other hand, was also proud of her beliefs and anxious to take part in her country’s fight. In the poem, Sir Winston Churchill becomes a symbol of Imperialist Britain. Like millions of people, I respect Churchill’s stand against fascism but, needless to say, totally abhor the ideal of imperialism he espoused. The poem reflects the plurality of feelings the man evokes in me and in many Indians of my generation.


Can you tell us something about your process of writing that helped this/these poems come to life?
To go through such deep feeling, where even all suffering and pain becomes academic, but poetry absorbs all the suffering. As for me, poetry is a unique medium talking directly to anyone—heart to heart, and allowing one to share and invoke view and feeling, especially the deep feeling which is always with me in the presence of my memories. It comes alive even politically, as is the point with “Sir Winston Churchill Knew My Mother.”