"Dog Days" by John McAllister
A Poem on Loss of Innocence


It was a row, a humdinger.
In the end the young bride damned
her marriage to hell, called the dog
and caught the train home to mother.


Which row it was she never said.
But she was always shifting furniture
so perhaps it was the time he got home from work
and went from bath to bedroom in the dark.


He gave her a few days, until it was plain
her temper would last as long as her red hair,
before he appeared at the door.
He said, I’ve come for the dog. 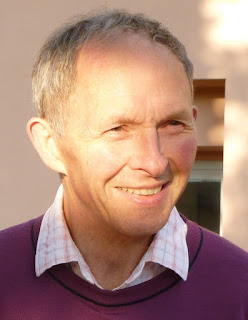 How did you come to write “Dog Days”?


I was never able to write a poem about my mother during her lifetime. Granny Sarah featured in several poems, and her strong character has inhabited some of my stories and books. But mother no.


Soon after mother’s death I went to a weeklong literary event in Killybegs, County Donegal. On the final morning mother’s stories of her early married life coalesced into “Dog Days” which was more or less written in one sitting.


I had just shown the poem to friends, Joan and Kate Newmann of Summer Palace Press, when I got a phone call to say that our family pet, a pug, had been knocked down and killed.


How did writing “Dog Days” affect your recovery?


My mother was quietly religious. She never preached but led by example and she felt that life, with all its ups and downs, should be celebrated. She was left a widow in her mid thirties with three children, all of whom had serious health problems. Instead of wrapping us in cotton wool she opened the door and told us to get out there and enjoy ourselves. She herself played bowls (doubles with an international champion) until months before her death. Writing the poem and remembering mother’s laughs as she recounted the different elements in it made me remember how she brought laughter to her own deathbed. When the Marie Curie nurse appeared she knew that the end was close. Instead of being tearful she introduced us as “This is my three children, but I have lovely grandchildren.”


Can you tell us something about your process of writing that helped this poem come to life?


The only way prose or poetry can come to life is if you are involved in life itself. My best writing is where I am tapping a memory from childhood or dealing with something I regard as a miscarriage of justice. Sometimes I take a real-life character and twist. In my published novel Line of Flight the main character is based on a real SAS soldier BUT in the book he is so useless at defending himself that he has to get his baby brother to fight his battles.


Who are your favorite poets or poets new to you whom you'd recommend to others?


Recommending favourite poets is like sending someone into a library to pick a novel. They’d be lucky if they find one they really like. It’s the same with poets, but I’ll mention three whom I know well both personally and through their work. Professor Nigel McLoughlin, University of Gloucestershire, England. In appearance and voice Nigel sounds like an all-American footballer, but he writes with great delicacy. Paul Maddern is originally from Bermuda and has recently taken up a lectureship in creative writing in England. Right from the first day we met at the Seamus Heaney Centre at Queen’s University, Belfast, I knew that Paul had a special gift. Jean O’Brien has won several international awards for her poetry. In spite of the fact that she has a low opinion of men generally, she still regards me as a friend.


What are you working on now?


I have one novel with a publisher which should be issued this year. The Priests’ House is about an Irish Catholic priest turning up at his new parish with his girlfriend. I have just published a novel about Ireland of the 1960s which is currently available NOW for Kindle at Amazon.com from Portnoy Publishing. The Station Sergeant is about an ageing policeman who likes being grumpy and hates being caught out in kindnesses. A mad gunman is killing people seemingly at random. Eventually the sergeant has to make some hard decisions before he can bring the killer to justice.


Having got that lot out of the way for a time I hope to get back to writing some poetry.

John McAllister was an Accountant in Practice and a Tax Consultant for forty-five years. He has now retired to become a fulltime writer. He read for an M. Phil. in Creative Writing at the Oscar Wilde Centre, Trinity College, Dublin. His poems have been published in Europe, Australia and in the USA. His collection of short stories, The Fly Pool, was published in 2003 by Black Mountain Press. He is currently working on a second collection. His first novel, Line of Flight, is available on Kindle. His latest novel, The Station Sergeant, from Portnoy Publishing is now available on Amazon.com for Kindle, click here to order The Station Sergeant by John McAllister.